These earrings are for the other friend in Cactusville.  A very different look.

I hope she likes them.  She has a no-nonsense personality.  Someone who gets things done right away, a great organizer who frequently takes on the Herculean task of herding hens – no easy feat, let me tell you.  And she does it with aplomb and tact.

Turns out, she wears a lot of red too.

I thought something lighter would be appropriate.

I do seem to be on a Cactusville binge this week.  But there you go.  Here in Sierraville we have pinion pines and sage brush.  Lots and lots of sage brush.  In Cactusville, the quintessential plant is the saguaro.

When saguaros bloom, the flowers at the tippy top of their arms smell wonderful.  Unfortunately one either has to hike up above a saguaro forest, or be above them somehow to smell their fragrance.  Think hot air balloon.

So, this is a quilt pattern from Sew Kind of Wonderful that I picked up at the 2019 Quilt Show Reno. Alas, the 2020 show was canceled. The pattern requies a mini QCR ruler , which is developed by Sew Kind of Wonderful.  It makes cutting the curves for the top of the arms, as well as the cactus flowers so much easier!

This is the first time I’ve done a quilt pattern.  The first quilt where I’ve (mostly) followed instructions.  Pretty amazing for moi!  Now it’s in the long arm (hands?) of a professional quilter.  Another first.

It’s nice to bring a smile to someone’s face.  To know they’ll be surprised at something completely unexpected.  In a good way.

In these trying times, I think this is a Good Thing.  There’s too much fear, angst and uncertainty going around.  It’s nice to know people still retain their humanity, kindness and compassion.

Which is a very long winded way of saying I’ve been thinking of some old friends in Cactusville, and wondering how they’re doing.

I wanted to do something to bring a smile to them, as they have done for me since I’ve moved away.

A quick bit of e-mail chatter revealed that their favorite colors are red and black (just like Prince Charming – who knew?)

Red jade cabochons, czech flowers, bronze seed beads.  The giftee is a lovely, elegant, tall woman who will wear them with perfection! 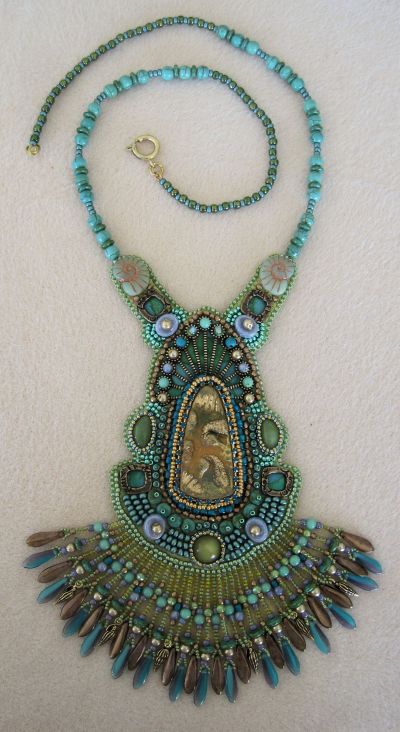 Sometimes an idea takes on a life of it’s own, starting or stopping in a completely different place than where I thought it would at inception.

I fell in love with the fossil-esque seahorse cabochon, with no idea where it would lead, or even when I would use it.  Turns out, that was sooner rather than later.

From there, things just grew and grew and grew.  Hey, these green jade cabochons look good, let’s add them.  How about this filigree?  Sure thing!

Oh, there are those nano beads (much more difficult to get than when I first acquired them) I’ve been wanting to use, they work too.  On it went; quite the journey of discovery.

The symmetry of the piece was also a challenge for me, as I rarely do symmetrical.  I’m much too “bent” a personality. 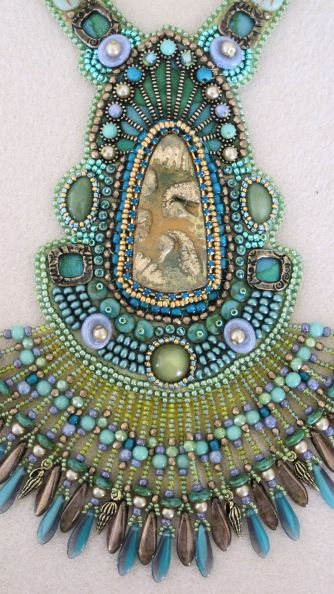 After that was fringe.  Yes, fringe.  More Fringe.  Of different lengths, with different drops at the ends.  Sometimes a dagger.  Sometimes a sea shell.  I think I have finally figured out fringe, at least for the time being.

Who’d have thought?  Certainly not I.  It’s been a real pleasure to meet the artists at  North Tahoe Arts, and even more of a pleasure to set up in their gallery.  If you’re in the area, please be sure and stop by, the gallery truly has something for everyone!

Like the finest bittersweet, a pair of dark chocolate earrings for the discerning palate.

Umm, no, I wouldn’t eat them, after all, they’re glass, not good for the tummy.

Definitely good for a pick-me-up!

Phred says there’s nothing like a good nap on fresh sheets.

Savannah Sky is the name of a mini gerbera daisy that has exactly these colors.  Who knew!

Not all earrings have to dangle.  This pair is compact and subtly colorful.  Ecru, taupe, apricot, silver.  A nice change.

Czech flower beads, delicas and druks.  And a lot of fun too! 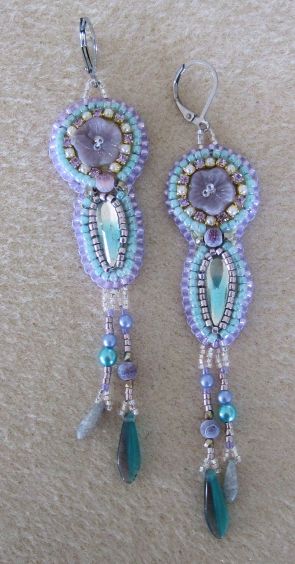 A second pair of gift earrings for my former co-worker.  I made the deep purple pair, then thought they looked a little dark.  Something to wear in the winter, but put away once the warmth of summer arrived.

She needed a summer pair.  Lavender and aqua and crystal marquis.

The discerning reader will catch that I used some of the leftover amethyst druks that made up Amethyst Pebbles.  They provided the perfect combination of color and texture, sitting next to the crystals.  The rest are delicas, daggers, and druks.